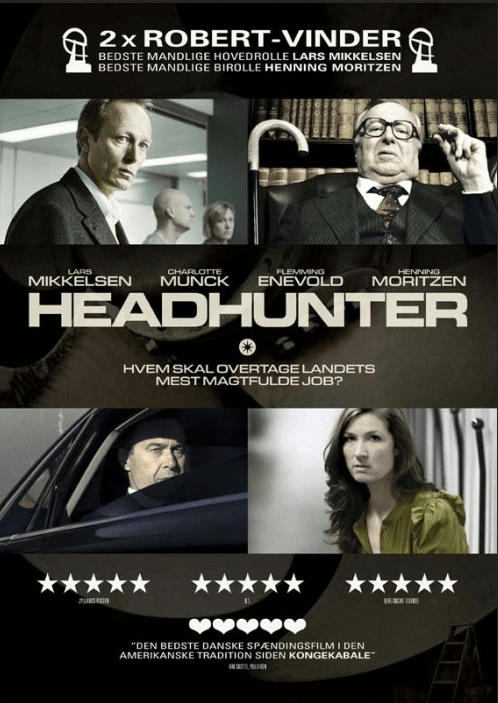 Family games in the recruitment process

The beginning of the year is a great opportunity to see some interesting and outstanding films. The movie freaks are satisfied with many good releases in the cinema programs. Today, there is no sense in looking for films with a touch of human resources, recruitment process or executive search method. Nevertheless, we should move back into 2009 and then watch a Danish film ‘Headhunter’. Is there any sense in spending 100 minutes on this film?

The film review should not reveal many details about the plot. On the other hand, it would be unsuitable not to tell you something about the story. Martin Vince is the main character, who has a perfect working life. He is one of the leading headhunters on the Danish market. Unfortunately, his private life is not a bed of roses, because his son is seriously ill and his marriage is getting worse. He receives a very interesting project. Because of advanced age, Niels Frederiks Sieger, the represent of the Danish Business Elite, needs to find a worthy successor. The whole recruitment process, in which the executive search method is used, is kept in a secret and the management board has no idea about it and even … his last son Sieger, who aspires to take over his father’s company. Headhunter becomes soon convinced of being a pawn in this brutal game between the Siegers. There is no question of retreating from the project, especially when his son is implicated in the whole matter…

The film is a thriller and a great example of a high level film. The film critics claim that without a good screen play there is no possibility to produce a great film. In this case, the story is smart and the plot is absorbing and it keeps in suspense. The film presents a solid business world in which a different grey scale dominates and the reality is showed in a very convincing way. A great screen play and dialogues of the Danish actors are natural, especially in the case of Martin Vince and Niels Frederiks Sieger. One of the pillars of ‘Headhunter’ is a cold and gloomy atmosphere, which is made thanks to the interesting photos and very dynamic music. The specific landscapes of Denmark give the film an additional value.

‘Headhunter’ can be recommended to everyone who likes the thrill of watching a good thriller. It is good to look for films with a similar background, such as ‘The Method’ or a French film, with a telling title ‘Human Resources’. As you can see, Europeans directors are quite interested in executive search method and in a recruitment areas. Thanks to these pictures as ‘Headhunter’, the popularity of recruitment process will maintain in the following years.